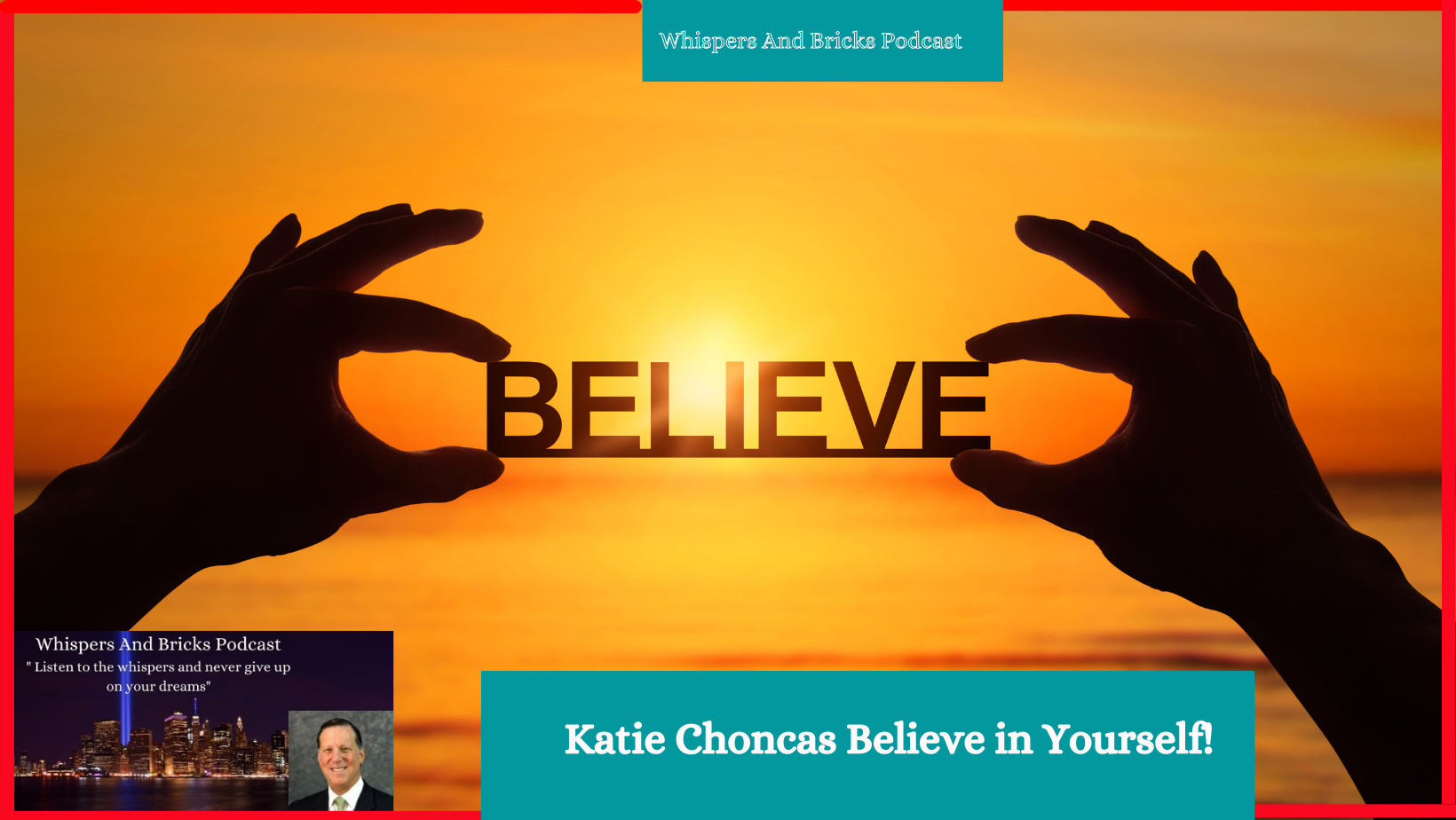 Katie Choncas Believe in Yourself!

Katie Choncas Believe in Yourself!

Katie Choncas Is a very talented artist. She is an actor and singer, and voice-over actor. Sharing the screen with many well-known

actors and actresses. She describes her decision to pursue her career and have children later in life. She describes her journey as an actress and how she learned to invest and believe in herself. She hopes her story will help other women do the same.

Ari: Welcome to this person bricks. My name is Ari show and I’m your host I have with me today Katie Elizabeth shanaka ‘s Katie is a Greek American artist working in the entertainment industry for two decades. On Katie’s website Janaka stock calm. You’ll see some of the creative ventures she’s been a part of TV, film, acting, voiceovers, music, podcasting, and articles that she has written on Arianna Huffington publications. Katie is a multidisciplinary artist who utilizes her voice to inspire change and transformation in people who want to make an impact on the world. Katie is a Greek international actress who made her first onscreen network television appearance in 2005 gracing the Scylla screens ever since Janaki says globalized network television landing roles on top television series such as CBS, a CSI New York Cold Case, FX networks It’s Always Sunny in Philadelphia, Law and Order SVU just to name a few. Janaka has also excelled in film as she booked supporting roles in films with ALPA chino. Robert De Niro, Jessica Simpson Morgan Freeman Antonio Banderas, Nicolas Cage, oh my god, the list goes on and on. Janaka has worked with 19 legendary ala stars in one year. A working professional voiceover actor in the entertainment industry. Katie specializes in cartoon animation voices with a branded name cartoon Katy shanaka is brought to life characters such as soup from Minecraft, and Georgia as Nancy Drew’s best friend. Katie has a raspy golden voice in voiceover such as Emma Stone, Scarlett Johansson and Demi Moore. Katie loves being a part of the voiceover entertainment industry. She’s a published author of a new poetry book titled A lovers fair Terry lovers fairy tale. Please help me welcome Katie Janaka. Katie, how are you?

you so much. My heart feels very full warm right now after hearing the intro. I

you. Thank you so much.

Ari: My pleasure, man, you’ve it sounds like you’ve got you’ve had quite a career, you have quite a career going forward. You know, you’re still very, very young. So I know you’re gonna do a lot of a lot of good things in the future as well. So let me just welcome you to whispers and bricks. And as you know, the whispers are those voices telling us what the right thing to do is, and they represent the good in life. And the bricks represent the bad things that we go through in life. And let’s be real, everybody has a brick thrown at them at some point in time or another some more bricks than others, some less bricks, some bigger bricks and some smaller bricks. But everybody goes through something alive. Nobody’s got the perfect life. Okay. Now you come from a large Greek family. And early on, you had this idea that you wanted to have a bunch of kids, but you also had these dreams and goals about having a career. Why don’t you talk to us about that a little bit? Sure, sure.

Ari: Let me ask you this. Did you ever fall to a point so low? That you said to yourself, you know what, I quit a kid do it anymore. I’ve given up on my dreams, I don’t care anymore. I’m just gonna, you know, get into bed, you know, roll to a ball and just sleep away my life. I mean, you ever did you ever get that bad? And if it did, alright, well, obviously, we know how you came out of it, because you just explained that to us. But what was what was it like was Did it ever happen?

Katie: Not the way that you’re saying no, never, never, never, because I’m not a quitter. And I think it’s okay to take a day off, or three days off, or a week off and just rest and sleep. It’s the way it’s the number one way our immune system can repair ourselves actually, in our immune system through sleeping, it’s so it’s so good. If if one is depressed, it’s good to like, take a nap and sleep it off. Or like you have a big meal, just like sleep it off. Because it takes four hours for the food to digest, you know, from our system. But there have been times multiple times where I’m doing so much where I’m, um, for years, I’m just like, okay, what can I unload? What can I unload? What can I unload? So I’m always looking, you know, as a producer, I’m always filtering filtering to, you know, be more minimalistic, so I can have my health, wealth and prosperity. But there’s never a time of, I’m throwing in the towel and forgetting about it. Because, you know, I have joked around and said okay, like, I’m gonna retire from my career and just have a family. You know, II mean. But that’s, that’s, that’s a job within itself. But, um, yeah, so I’ve never been a person to be a quitter. Like, I’m an athlete, you know, and so I don’t, I wasn’t raised that way. And that’s not my mentality. Right? I just love I love I love life so much in the arts and being human, and just the experience of being here. So no matter on our highest or worst days, it’s a part of the process. And I can take it and learn and apply it to a canvas or to a character, or to an experience of something I’m going through and put it into my craft. So I look at everything. You know, if I’m feeling this way, that means I experienced something the extreme opposite of the rainbow of such joy, right?

this, this too shall pass.

Ari: Yeah, absolutely. Let me ask you this, who is the one person that you could point to that you would say had the most influence in your life and why?

Katie: My Yeah, my 92 year old grandmother, who’s my bestest friend in the world, and who I’m named after actually, kids get ki St. Kitty, Jackie. She was a martyr, her name’s Sunday. In Greek, Kitty, I came in Sunday. And she taught me unconditional love. I can tell her the worst thing that I think is the worst thing in my life. And she’ll just pat me on the shoulder and just feed me some food. You know, like, she’s so understanding, but culture risk, she came from the old country from Greece. She went 10 hours each way on the donkey to pick blueberries for her job. And, you know, she came to America to provide a better life for her family and for us. And so, you know, I’m in deep gratitude and honor for my, my grandmother. She’s amazing. She’s so sweet. And she’s just she’s taught me everything. You know, she’s taught me so many beautiful things, but probably most importantly, the culture and in love and the joy of the Spirit and remembering homage she always says homage in Greek that means like, the the land, the dirt the country, like never forgetting your roots where you come from, you know, and always paying it respect no matter what.

Ari: Wow, that’s, that’s amazing. And there’s something to be said, you know, for the old country culture. You know, it’s so important that you know, that we take what we can, that we learn from our elders. Because, you know, as much as we think that, you know, what do they know, this is a new world, they’re from the old world, but they know a lot. And they can guide us very, very well, if we’ll just take the time to listen. I know my mom, my mom has taught me a tremendous amount she is, you know, thank God, she’s going on. She’s 90 years old. And you know, she’s still going strong. And, you know, she’s been she’s been a pillar for the family. All right. And and and I think it’s wonderful. So let me ask you, do you have any words of wisdom for my audience?

Katie: Yeah, of course, some words of wisdom would be just do it. It’s, it’s Nike. It’s a Greek word, it means to win. And so my mentality at a very young age was just to do it. So it’s like the whisper and bricks, when you have an intuitive hit that comes, just go and do it. Everything else after that is fear. It’s an analytical, it’s in your head. So just just go and do it. Also, it’s really important to have a good community around and communication and we’re only as strong as our weakest link. So if something feels heavy or strong, it’s really important just to communicate that to someone because they can help. Mm hmm.

Katie: I’m looking to get on TV as a household name. So I’m going out for TV shows right now. I’m going out for animation roles for voiceovers. So that’d be awesome to book some elite and an animation series to go out for commercials video games for voiceovers and season for my podcast. It’s a women empowerment series exploring divine femininity and all genders. And so that’s gonna launch in January. So I’m excited, you know, to explore that, because not only am I doing it for the people, I’m doing it for myself, because of the story I told you of me looking to a masculine man in, in the world. And so I didn’t have a lot of space of divine femininity, a lot of space of my my own grace, although I am graceful, but to be more vulnerable with my emotions, and it’s okay to not be okay, and to fully express myself and cry, and, you know, it can be in all gender. So I’m really excited to endow that relationship with my own self to,

Katie: Yeah, I do industry coaching for people. So it’s right on my website, they can sign up and have an appointment chinachem COMM ch O N, ac as.com. And I am on all social media accounts. Okay, great. And you can email me through my website, if you want to email me about anything a question or something. Yeah.

Ari: Awesome. Katie, thank you so much for sharing your story with my audience. You’ve been a great guest. I’m very excited. Good luck going forward. I know you’re going to do some great things. I mean, you just you you’ve got that personality. You’ve got that drive. And I know we’re gonna see great things from you. Thanks again. You’ve been listening to whispers and bricks and I’m your host Irie Sharma remember, if you feel like you’re stuck in the mud, like you’re spinning your wheels, wasting time, your career, your business or your life. If you know you’re not enjoying all the success, satisfaction and significance that you desire. Then it’s time for you to book a call with me at call with ari.com Check out my whispers bricks Academy and until next time, listen to the whispers avoid the bricks.